Tips On How To Help Your Child Get Through Chicken Pox 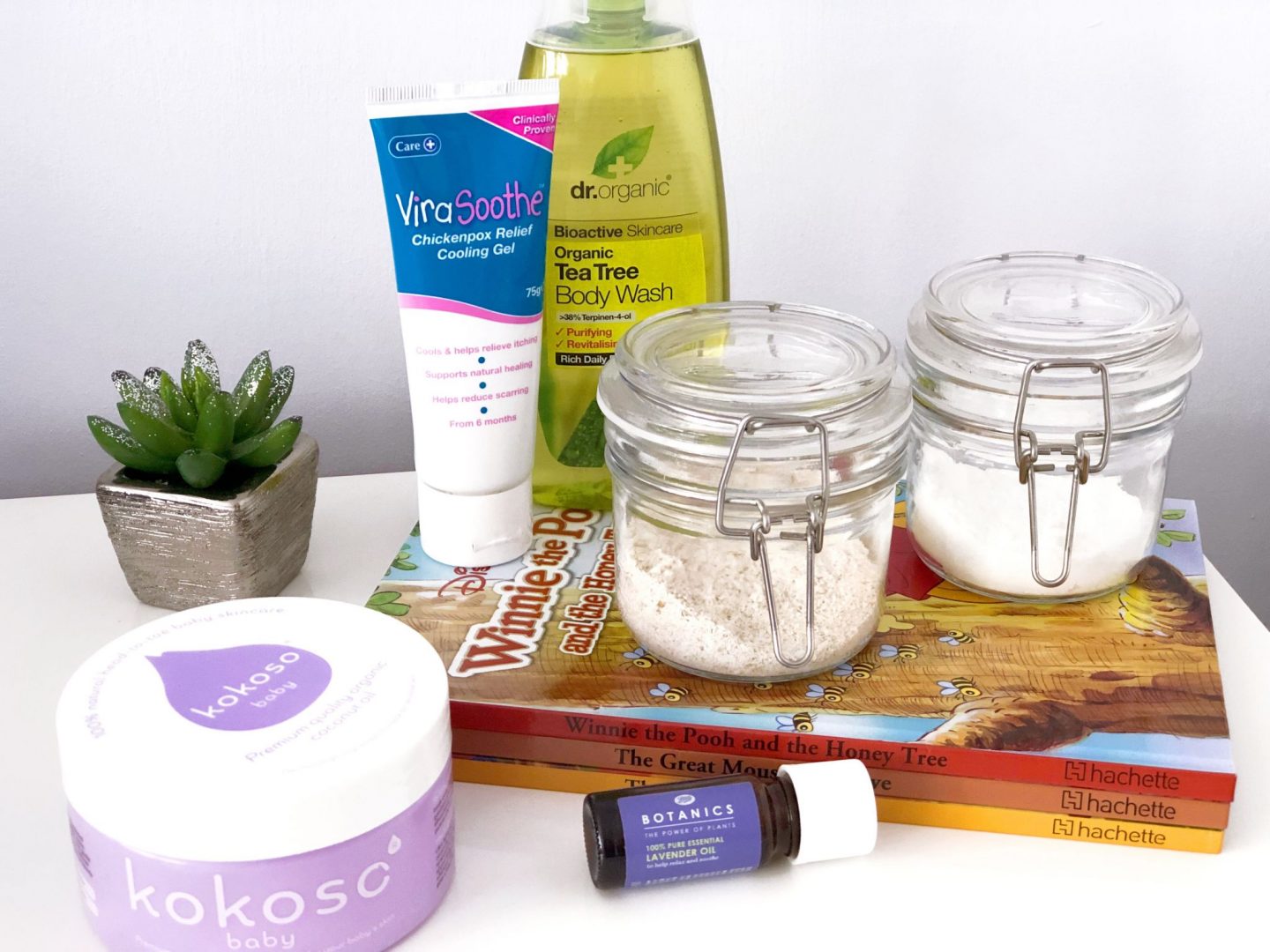 After months of Chicken Pox doing the rounds at my daughters Primary School, she finally caught it! As a parent you have mixed emotions about Chicken Pox, one side of your head is like ‘yes we need to get it over it and done with’ while the other side is stressing out and panicking – ‘oh sh*t what do I do!’

HOW WE DISCOVERED MY DAUGHTER HAD CHICKEN POX

That last thought is definitely how I felt when that morning came, as Melis was getting dressed up as Matilda for the rescheduled World Book Day at school, I noticed a red spot on her neck. As she had got herself dressed that morning I hadn’t noticed until I was fixing her hair up, so I stripped her back down and there they were. At first, I could only notice around 6-7 across her body, all red spots apart from one on her back, which was on the second stage of chicken pox, filled with clear fluid! Instantly I looked up Chicken pox on Google images to compare and confirm what it was! Initially, Melis was more upset that she wasn’t able to go to school for World Book Day as she said she felt fine but once I explained that she was contagious and that she would make her school friends unwell she happily agreed to a day at home with Mummy!

Now I remember Chicken Pox when I was a little girl and again when both my little sisters caught it, all at different ages. One things I couldn’t remember was in what order all the symptoms played out. Then I remembered, the previous week, during those snow days Melis had a 24-48 fever and vomiting which now I know to be the start of the Chicken Pox, obviously I didn’t realise that was the case as a few weeks before we had a sickness bug doing the rounds at school and at home. Back to that day; as the day progressed a few more red spots appeared and within 24 hours they had filled with the clear fluid (which is the most contagious part) at this point the only symptoms we had to deal with was the spots and the itchiness that accompanied them. 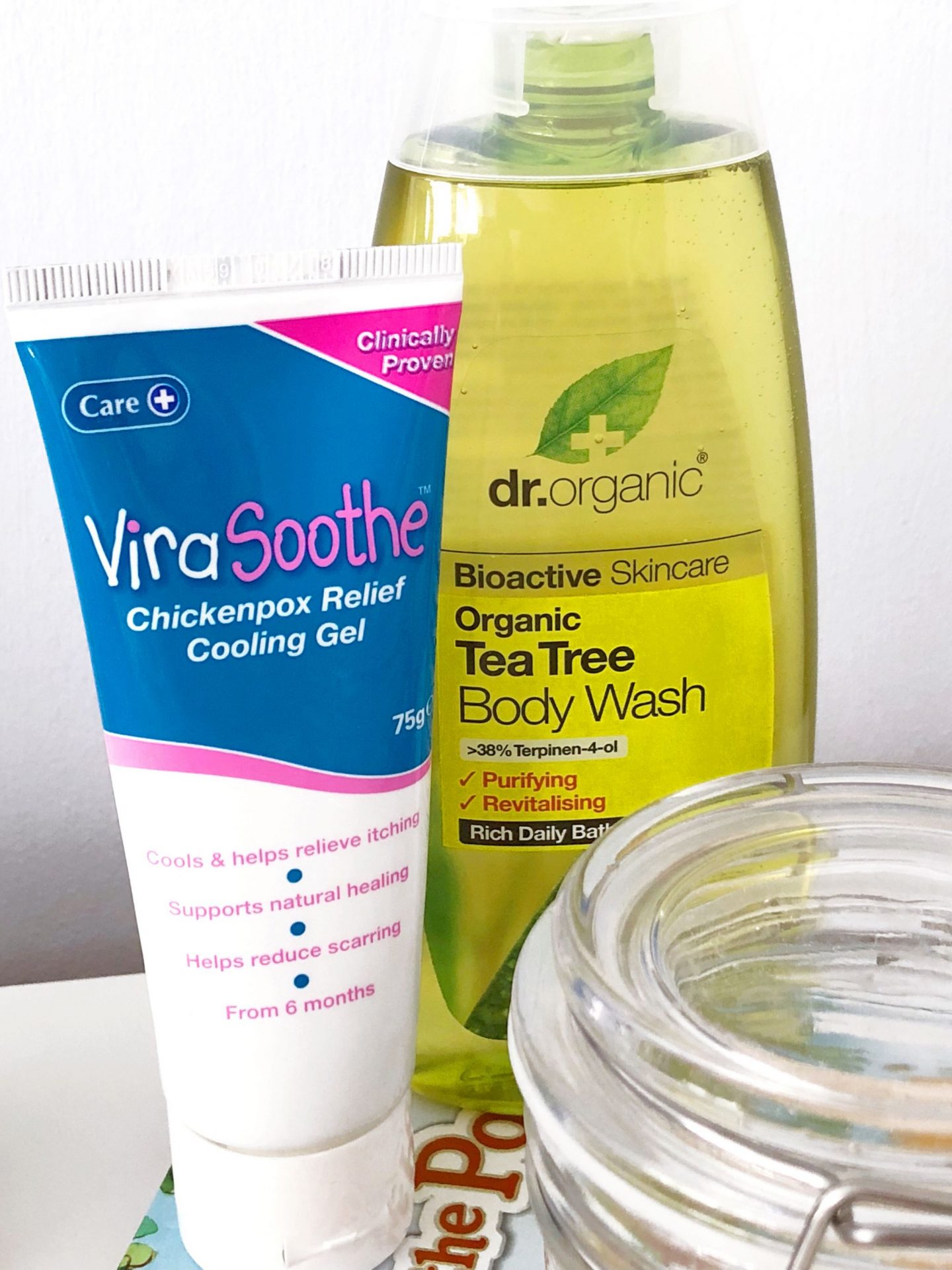 WHAT WE DID TO HELP MY DAUGHTER GET THROUGH CHICKEN POX

That leads me to why I wanted to share this post and our first Chicken Pox experience. After doing some research and my background knowledge of skincare and skin issues I quickly set up a routine of natural skincare products that I started to treat my daughters chicken pox with.

As Chicken Pox can leave the skin scared when they start to scab I made sure to explain to my daughter not to scratch the affected areas but to pat them over her loose clothing to get some relief without her nails clawing the skin and causing any infections that could lead to scarring.

Tip No1- DO NOT scratch, pat the skin instead!

Initially, after a recommendation from a friend, my husband picked up ViraSoothe Chicken Pox Cooling Gel, which is specially formulated to help soothe the discomfort of Chicken Pox. However, as you could only apply it a few times a day, It wasn’t providing the much needed relief my daughter needed, so that is when I took a step back and re-evaluated what we needed to do.

Firstly, we tried using an antihistamine which was recommended by the local pharmacist, however we quickly learned that my daughter had an intolerance and threw it back up within half and hour. That was that in terms or oral medication. 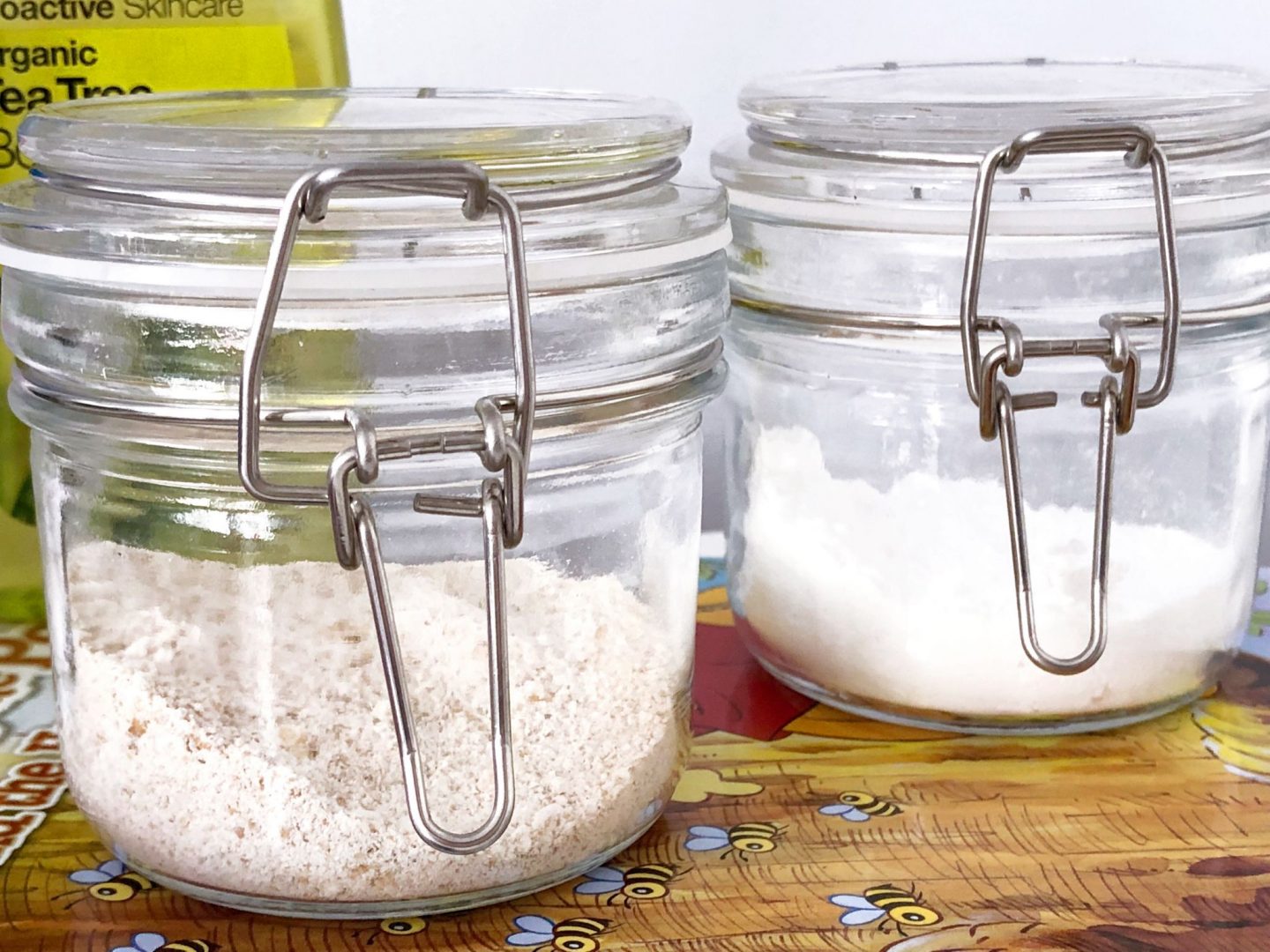 Next, I made up some ground oatmeal in a jar and also some baking soda. I ran her a warm bath and put 4 tablespoons of ground oats to 4 tablespoons of baking soda with a few drops of lavender essential oil. As she had a soak pretending to be a mermaid in the murky water, this bath helped soothe her skin. I then used my Dr.Organic Tea Tree Oil Body Wash to wash her skin every evening before bed, the Tea Tree oil helps to prevent infection and works as an anti-inflammatory on the skin. Once, I patted her skin dry we would continue by applying a generous amount of coconut oil all over her body, using a cotton bud on the actual chicken pox which helped prevent me from touching them directly and stop any from spreading.

The key to dressing is to dress in loose fitting clothes/pyjamas to prevent any sweating and more irritation to the skin. Every night for the first few nights, we used socks on her hands to prevent her from scratching in her sleep, which worked brilliantly.

In terms of her diet we made sure she increased her daily fruit and vegetables intake and decreased her carbohydrates to which supposedly makes Chicken Pox worse. I included a lot more fresh garlic and ginger in her food and used turmeric in any dishes that I could to help fight the illness and to aid the healing process.

After the 4th day her Chicken Pox had all scabbed over and all in all she may have only had 40 or so all over her body; over those days she seemed more tired needing lots of rest as she sometimes seemed lethargic and drowsy, but her body did amazing fighting the illness and she was able to go back to school after the 5th day. I’m now hoping that if my son has caught it (it usually take up to 3 weeks to come out after being in contact with an infected person) that his will be relatively mild and controllable like my daughters was. 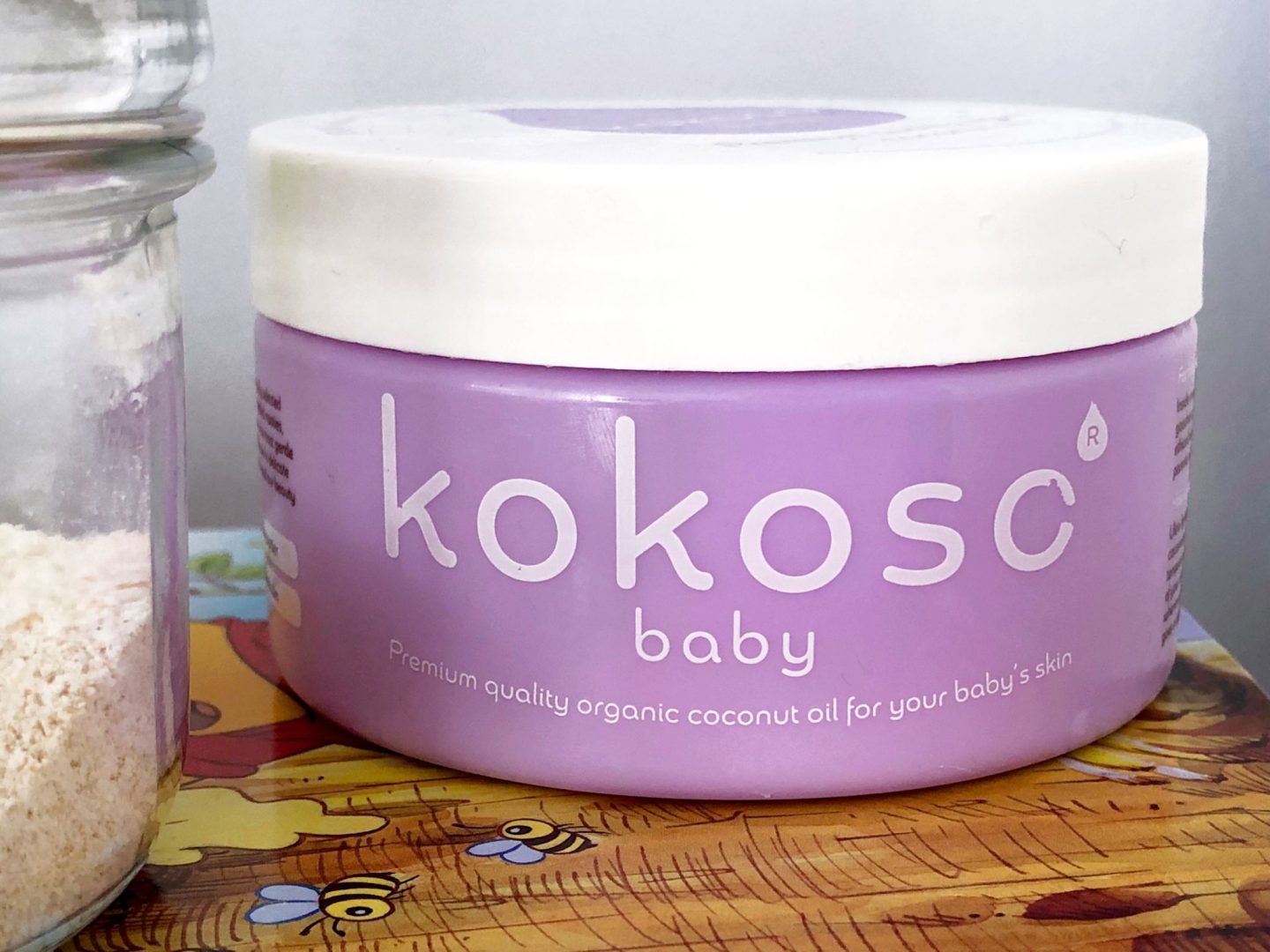 Most of these ingredients/products you may find you have in your kitchen and bathroom but if not I have hyperlinked the above list to show where I purchase the body products from.

IMPORTANT THINGS TO REMEMBER WHEN YOUR CHILD GETS CHICKENPOX 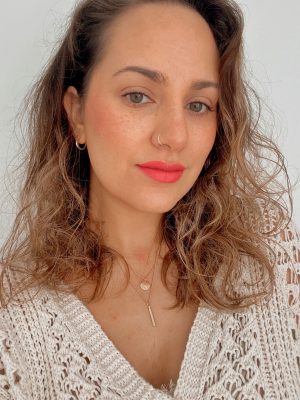